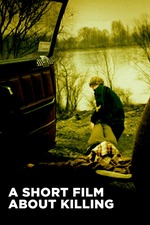 So after seeing the incredible reviews by LB buddies FoundOnYoutube and recently C4rlo5 and having somewhat enjoyed the Dekalog episode this movie is based on, I finally decided to hop into the hype train.

And starting with the positives first, the cinematography in this movie is outstanding. The high contrast with the use of filters to raise the contrast and gives this movie a green yellow-ish tone that not only makes for an interesting aesthetic, but also enhances the bleak nature of the entire picture, especially with the use of black with scenes like the cab scene has this moment where the black tone hides large part of our killer’s face and the result is this nice callback to film noir. The score in here is also just beautiful, with the track that sounds in the café being my favorite, especially as reminds me to this underrated Michael Kamen’s track from X-Men that plays during the final scene with Wolverine and Rogue, its so poignant yet it has this nice sense of nostalgia or something. And of course, last but not least, the understated and subdued performances are simply powerful and overall great, it gets to a point where I can see how you can actually sympathize with our murderer despite its hideous crime, and that’s all thanks to the acting work.

Unfortunately, from what I’ve read from many reviews, the thing that hits many people is its politics and stances towards the death penalty. And sadly there was where it loose me. While I feel sorry for the past our criminal, none of it justify its senseless actions in the slightest. The more I think about it, you may form of an argument maybe we should’ve been locked in a psych ward, though knowing how the system works in most of this center, you may also say the death penalty was a much merciful sentence. But yeah, differently to The Green Mile and Just Mercy or Time. none the movie shows to me tells me he didn’t deserve the sentence.

All in all, while again I don’t fully agree with its politics, this is undoubtedly a movie that deserves to be seen. I fully recommend it.