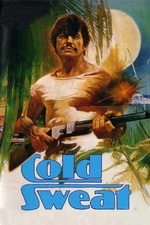 Action!: Terence Young - The Many Stages Of A Real "M"

Terence Young continues to expand his filmography by going in directions that one would not expect, and with some often feeling like odd choices for him to direct. Yet it's also what makes the director's career after "Dr. No" so intriguing because like a box of chocolate, you never know what to expect.

Be it a period drama about a love story about Austrian prince and his mistress in the middle of a war, a home invasion thriller with Audrey Hepburn playing a blind woman who takes care of some petty criminals and a sadistic killer, or in this case, a thriller of the kind that made Bruce Willis and Gerard Butler stay afloat in the industry as well as Charles Bronson in his time.You know the drill, it stars as a man with a murky past as a war mercenary and now he comes face-to-face with former members that he betrayed and now they seek what they believe is their due, and now it will be up to our hapless anti-hero to free himself from them with wit and kicks.

Charles Bronson, to no one's surprise, does a great job as this tough man who is trying to fix his life by getting rid of the old one. Bronson's tough and somewhat troubled personality is as natural to him as John Wayne's rugged cowboy appeal. It's easy to see Young using his past Bond experience, Joe almost like a more badass, civilian version of Lazenby's Bond. Liv Ullman was without a doubt a surprise since I did not expect her to appear in such as film after her strong performance in Bergman's existential dramas. It isn't hard for her to play the rather clever wife, although in the end she is just the typical wife who must be rescued.

All in all, with a handful of great action sequences like the almost 15 minute car chase on a mostly narrow, cliff-side road and great dose of exploitation, this is one fans of the genre would definitely get a kick out.