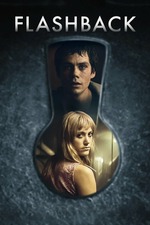 The most confusing part of this very bizarre and utterly confusing movie was not the film itself, but the fact that they had, for some unexplainable reason, some middle-aged sounded man dubbing Dylan O'Brien (who's a year away from reaching 30 years old). Like, why? How? What? Did the dubbing studio ran out of young dubbing actors?

Aside from that, it feels narratively like someone watched Prime and Donnie Darko and thought, "I can do that!". Flash news, no you can't. A film like this shouldn't require me to read the entire Wikipedia entry.

Now, credit where credit is due, buried beneath all this hullabaloo is a great sci-fi movie with lots of great ideas that are assisted by a wonderful visual narrative and effective editing.

A great part of the movie is also definitely its lead performance. Although I have not seen all of Dylan O'Brien's work, I think this is among his top best from the ones I've seen him in so far. The confusion, the fear, the intrigue, the charm, the anger - all of these emotions are well captured by his performance.

All in all, a time travel sci-fi thriller that can certainly hook you up with its strong direction and style, but ultimately could feel as a disappointment when you see it fall short and crumple under its own ambition.