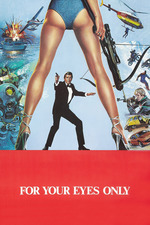 After the disappointing Moonraker, the franchise returns, in many ways, to its roots while still maintaining the sense of humour that has marked all of Roger Moore's Bond films.

Despite the fact that, at first, characters like Q were in a lousy mood, responding with a level of cynicism that was rather shocking. I also think all of us agree that the way the biggest antagonist of the series was killed off was utterly bizarre and lame, especially with his absence, which made the death somewhat underwhelming. I kept thinking which of all the actors had died since in all honesty, this man has had almost as many actors playing him as James Bond himself.

But it's not all negative. For instance, the mindless, explosive action that reigned supreme in the 80s is present in a number of scenes that are not as slick and as effective as they could have been, but I enjoyed them nonetheless, both the one underwater and the one on skis (though they couldn't have chosen a worse background music). The Bond girl in this one is another positive as the film gives you plenty of reasons to care about her and her revenge against the antagonist, plus Bouquet does a good job of making you care about her. Additionally, I liked how the film brought back the death of Bond's one and only wife, adding to the emotional depth of this relationship.

All in all, despite Moore's advancing age and the story not reaching its full potential and the humour being sometimes distracting, this is still an improvement over the last film.