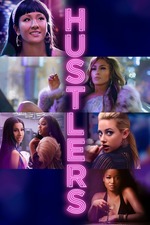 Featuring a stellar performance by Jennifer Lopez, Lorene Scafaria's dark comedy its a nice new take on the great crac from 2008 through the eyes of some real strippers who try to make a living but always seems to be dragged into this underground world of sorts.

The cinematography its really great, with Scafaria going for a very subtle new direction when it comes to shooting strippers, staying focused on the individuals rather than their bodies, letting us actually get into the psych of each of them. However, every frame and every move on the club its wide enough for audiences to get a sense of location.

The editing is another incredible element. Especially throughout the first two acts, its paced in such a way that's both energetic and keep you entertained and glue to the screen. Its not fast nor stylish, but it moves at such a great speed that its hard to get bored at least you are actually in the mood.

Only reason I don't give it a much higher rating its because while the camera work its great, the camera tend to move very quick from one place to another that it felt a bit too rushed. Also some of the other acting are pretty nice, but not such as high level and you didn't get to connect with all of them. Also the way it ended felt a bit too anti-climatic.

Nonetheless, this is certainly one of those great films from the year that doesn't fall into the Superhero or big Blockbuster tag,