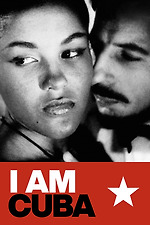 Man, talking about a movie that switches my emotions in two acts. The first one is a sublime and poetic love letter to the Caribbean nation and walking audiences into the people and culture that somewhat still remains to this date. On the other hand, we have a propaganda, a love letter to the revolution many claim would save Cuba from the reigning dictatorship, and little did they know it would enslave them for decades to come. Not gonna lie, when one of the characters basically said there were no other options and supporting the Castro revolution was the only way to "freedom," that broke my heart. So many illusions, so many dreams - and for what? I just wished to have a Delorean or have the Samantha's power with me so I could back on time or enter the screen and tell them "maybe you should try plan C or D or everything but B."

In that sense, comparing it too many others propagandistic films, especially by the Nazi party, this is somewhat harmless. Which, of course, makes sense, because no matter how evil Castro and his reign might be, él le queda chiquito a Hitler.

The reason, though, what this is so high on my rating its because the camera work. Sticking to the themes (not on purpose) of stream of conscious, the camera work and cinematography here its AHHMAZING! Its Terrence Malick, before he became Terrence Malick. It has the same level of brilliant motion (and emotional) work with the camera feels like if Lubezki had shot "The Thin Red Line" on the same style as he did with "Tree of Life," while still having some of the "humanity" of the latter one.

Another thing that sparked my interest was the high level of irony. See, thank God there was and still is hope in Cuba and Russia and audiences simply didn't bought the whole propaganda. They HATE it in fact and this fell into an oblivion. So, out of all the people, were the Americans that actually dig this out and show it to the world. One of those people were Scorsese, which I can highly see this movie influencing, especially when it comes to the way he edits his much stylized and quick paced pictures. There's some high resemblances between the two.

All in all, while its heavily preachy and you might get depressed at watching these kids giving their lives for a cause that will eventually imprisoned them to some extent, as a movie its simply hard to ignore its art and awe inspiring cinematography.