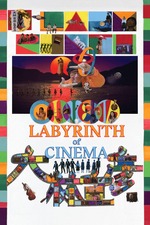 So I might be talking out of my arse as I have only seen one movie of Obayashi, but I will go on a limb and say the man just went all out with his last movie. It's clear that this is his most ambitious film to date, although I have not seen his entire oeuvre. This works both for and against the film.

Positively speaking, there are so many words and none whatsoever that could describe the creativity in this movie. The costumes and production design as well as CGI are as cheap as they can possibly be, but at the same time you will be left stunned by each and every shot you see. While the whole thing with the fish in space was a bit silly, the movie within a movie and the movie theater scenes were wonderful.
The running and visual gags were very in line with Obayashi’s sensibilities, though some of the depiction of violence and acting reminded me to some of direct (or indirect) films and directors influenced by the Japanese auteur like Stephen Chow and “Kung Pow: Master of Confusion.” I also loved the little humorous notes dropped throughout the movie.

Despite being visually stunning, the script is utterly inconsistent. Despite its great anti-war message, the film lacks subtlety, which I guess is a bit much in an Obayashi film. In addition to some of what it had to say, I also enjoyed how it incorporated what was clear to be a love letter to Japanese cinema, with some of the greats being discussed or, in the case of Ozu, literally embedded into the movie. The problem is that all these messages are constantly being interrupted and stepping over each other to the point you are more confused than anything else. To be honest, by the end I had pretty much given up on understanding what was happening.

All in all, while I would have liked a more coherent story, if you are a fan of the director or if the sound of a visual art-house epic sounds appealing to you, check this one out at MUBI.