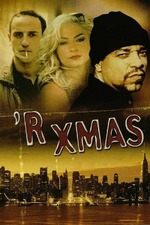 With two films dealing with the Dominican people under his filmography, I'm still not sure if I should feel flattered or worried. Regardless, this was a nice take on a Christmas movie, as Ferrara's commitment to the underground world resulted in a film that's a cross between a holiday and gangster film.

A lot of the movie was taken away from me because the script at times is confusing and generic, but I still enjoyed it because of the performances. Drea already knew a thing or two about the genre and playing conflicting characters on crime dramas after her phenomenal run on The Sopranos, and she delivered as this wife whose doing everything on her power to rescue her husband after being kidnapped by this rival gang lead by the always great Ice-T, who around the same time he was trying to change his career by switching the side of the law in his now better known run on Law and Order: SVU. Apparently, Lillo turned himself into a criminal not so long ago after joining the industry, which might explain why he's a good crook around here.

All in all, while it never quite reaches the full potential of its premise, if you enjoy Abel's crime dramas, you'll probably find enjoyment in this one.