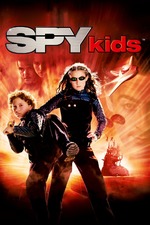 Re-watching this original trilogy of films, especially this first one, reminds me that sometimes it is not the money that matters with regards to visual effects and films in general, but the way the money is used and the director's creativity. A good example of this is the film We Can Be Heroes, which was made in an era when CGI had improved a great deal, the budget was more or less bigger, and yet everything about it pales in comparison to this film. There's nothing groundbreaking or unremarkable about the visual effects here, in fact quite the contrary, but they fit the movie so well and add so much charm to it. I would say my favorite scene in that regard is towards the end with the whole Wizard of Oz scene featuring Cumming and Sabara.

All the performances are great, each understanding the assignment and acing it to a tee. As siblings, Alexa and Daryl have incredible chemistry. I had a blast watching them try to save the day while working together as brothers. Meanwhile, you also have a number of characters that stick with you, from Trejo's now iconic Machete to Clooney's unexpected cameo at the end. Banderas and Gugino don't get much screen time, but they also get to shine on their own and do some amazing ass kicks.

All in all, Robert Rodriguez is able to translate a lot of that wacky sense of humor that has characterized him from the beginning of his career as well as a lot of the sense of thrills from his adult films for a family-friendly audience.

TODAY SCHEDULE
Spy Kids
Spy Kids 2: The Island of Lost Dreams
Spy Kids 3: Game Over
Spy Kids 4: All The Time In The World