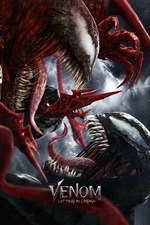 My relationship with Venom has been kind of... complicated? I didn't hate the first part after seeing it in theaters, but after my first viewing I never felt the desire to see it again. Going into this sequel, I wasn't particularly anxious or excited. I had low expectations.

And well, from what I remember of the first one, I'd venture to say that this one is probably more bizarre. To begin with, as many have noted, the pacing feels very rushed, especially at the beginning when it feels like the movie is running a marathon. Many of the performances, especially by Naomi Harris, are also over the top and a bit awkward, but intentionally so. The same could be said for Woody Harrelson, despite enjoying most of his work in here.

On the positive side, the relationship between Venom and Eddie Brock was great and probably better than the first. Their dynamic and banter landed better for me and most of the audience atmy screening. The big CGI fight at the end was probably one of the best I've seen, I liked that there were a few moments where we got to see some "real" interaction. Carnage's design was great, although I don't think they exploited the character to his full potential. And the soundtrack was quite nice. Always love listening to some new material by Skylar Grey.

All in all, even though I probably won't see it again, this was a fun movie. Those who enjoyed the first one will probably like this one just as much or even more. If you didn't enjoy it, you might skip it.

Also, Sony, you sons of bitches! Those who have seen the movie know what I'm talking about.