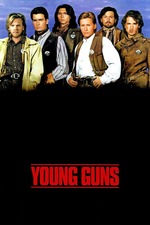 Have you ever went into a movie with the intention of teasing/trolling a friend who dislikes the film and then watched it with them and you kind of agreed with them? Someone in this Letterboxd community certainly got a win in that regard.

There's no arguing about the cast and the concept is there. We are talking about a cast of who’s who in the 80s, from icons such as Emilio Estevez and his bro Charlie, Oscar nominated performers such as Lou Diamond Phillips and low-key greats Dermot Mulroney, soon-to-be President/Agent Jack Bauer then hot vampire Keifer Sutherland and Hawaiian go-to show TV actor Terry O’Quinn – they all try to do their best by injecting some of their own flair and personality with the material, unfortunately the script is just really lacking. There’s a section involving them getting high up in the mountain, which in theory sounds incredible, but in execution it seemed so out of place. Although the entire 80s bumpy upbeat tunes took me out of the movie, the score was mainly good.

All in all, while its premise and most performances are pretty good, I would even dare to say entertaining – at least you are watching under the influence of pure nostalgia, there’s really not much to it and its direction makes everything feel so uninteresting.