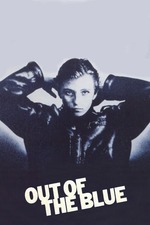 According to the IMDb trivia on Out of the Blue, a character study of an alienated 15 year old girl who loves Elvis and punk rock (especially Sid Vicious) and has an ex-convict father just released from prison after slamming his truck by accident into a school-bus full of kids, Dennis Hopper wasn't originally slated to direct the picture, but took over some time after production was going.

What seemed interesting to me about this is that looking at his performance in the film, if not quite how his character acts around his daughter (certainly not with the real reveal late in the film), is that it reflects how Hopper was at that time: drunk, abrasive, lashing out or closed off or on a tear. It was a crazy time for him, and for all of the drugs that he took it would be alcohol that drove him to rehabilitation later on in the 1980's.

Perhaps considering this autobiography isn't always necessary to look into in connection with a film, but knowing about the late Hopper's history of addiction is hard to ignore in watching this specific tale and character. Seeing him on screen is electrifying, even when he's more relaxed and joyful. It's a sad story and his mood at the time might seem to reflect that.

At the same time it's also an unexpected feat of artistry on Hopper's end, at least in part. It's not too hard to wonder why this movie would attract him as director; along with a juicy role for himself, it's a movie about teenage alienation (first film Rebel without a Cause, his idol James Dean), and it goes darker, truer, more disturbing and into the darker corridors of the American experience than other filmmakers would venture to.

The story of Cebe is tragic in its dimensions because her personality and outlook and way about herself and others was shaped by nothing of her own doing. She's a good person really, and even in her more reckless moments there's some kind of innocence there in her. We see some of this innocence when she tries to connect with her father when she's back (the aborted picnic scene for example, as she keeps singing her Elvis 'Teddy' song to Don as he's distracted). But she's also a punk rock chick, or an aspiring one, and looks for trouble anywhere she can. This isn't just acting out, though there is a good deal of that. It's a state of mind; escape the minutia and the drug addiction her mother has by wandering off with punk rockers and dirty cab drivers, and into her world of 'f*** the world'.

Hopper alludes ever so carefully, with just enough for the audience to keep wondering 'what is it entirely', to what the real deep-rooted horror there is for CeBe, why she acts the way she does around her flawed father. All I can really say without spoiling everything is that Hopper's Don is on the verge of tears when we first see him behind prison screen talking to Cebe and her mother, near tears the whole time he speaks. This is the most sincere we see him, certainly without the booze.

There is the genuine emotion of this, but there's also something else: abuse runs deep in this family. Ultimately, Out of the Blue is so believable and harrowing with its tale of dysfunction and doomed rebellion because of the circumstances and truth in the characters. Teenage girls should see the film, not simply because of how high its quality is as a tale of alienation, but because of how true it rings to the experience of being disconnected from authority and anyone else who can relate to. It triumphs over so many like it in recent years; it makes Ghost World look like a Nick show.

One more note here about this film, or, no, a couple. As a punk rock movie, or just a rock and roll movie, Hopper really gets as close to his first film Easy Rider for iconic status. Music is used so wisely and intuitively in this film, and in a couple of instances with music in the background and someone strumming guitar on screen (such as when CeBe goes to smoke grass with the cab driver). And for such a quintessential hippie he gets a punk rock scene with Canadian pogo fresh and invigorating, not to mention on the flip-side Neil Young's moving theme song.

Another note: Linda Manz. The young actress who was affected in speech to very good effect in Days of Heaven gets to shine here in her one real leading role. It's a performance that is brimming with energy and conflict, just what the character needs. And no disrespect to Hopper's own idol, but she would make the Rebel without a Cause quiver in his pants - or look on in bewilderment that someone could really have it worse than him. Much worse.

One of the most underrated films of the 1980's. Go see it if you can find it, though it's not for all tastes: a cult melodrama.