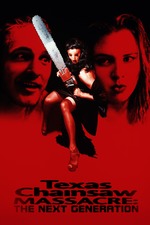 Texas Chainsaw Massacre: The Next Generation

Texas Chainsaw Massacre: The Next Generation 1995 ★★½

Dennis Hopper screaming his head off throughout the climatic duel with Leatherface was crazy enough, but certainly crazy enough for me to enjoy. Leatherface: Texas Chainsaw Massacre III was pretty good fun, but it didn't feel really "out there". This one? Turns up the insanity to a 11, and this stars Matthew McConaughey and Renee Zellweger who were unknowns at the time. They both do.. a good job I think? Honestly, I can't even with this movie. It's full-blown insanity, but I still enjoyed it on a superficial level. Kim Henkel was a writer for the 1974 masterpieces, however he returns to pen the script as well as being on the director's chair. Just what did the dude witness to possibly come up with something this ludicrous?!

Anyway, this was pretty fun even if I was really questioning what the hell I was watching at times throughout. It's hard for me to recommend this to just about anyone, but sometimes I like complete trash, and this is complete yet enjoyable trash. McConaughey must have been on something in this one because he really comes off as totally unhinged here. Overall, this is a really fascinating series. Definitely still the odd one out when it comes to staple horror franchises such as Friday the 13th, Halloween and the like. It's not to say some of such films had their outliners, but this series is truly OUT THERE. Yet, it's endlessly fascinating to watch if you can mentally separate the films from each other. All of them have their own merits, and aside from the 1974 masterpiece, they're all a blast if sometimes questionably insane. Bless this series.

Darla is low-key the MVP in this movie. McConaughey was likely clinically insane in this one, but Tonie Perensky plays her role perfectly and made the movie far more bearable if far more hilarious.