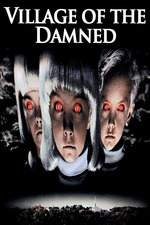 Village of the Damned


As I continue to discover more of John Carpenter, this is my sixth one, and I can say I now greatly admire the man. But this particular entry by Carpenter definitely feels the most jumbled, perhaps not as efficient, but that’s largely in the beginning. For other films I’ve seen, he always knew how to hook you in immediately, and never let go until the very last frame. This particular feature starts off nicely, introducing you to a nice town, in which the opening kind of harkens back to Carpenter’s own The Fog, but as we learn the “blackout” in which all of the citizens pass out, along with all birds and animals. The “blackout” is located squarely in Midwich, and then they wake up hours later. Suddenly, the women of the town are all pregnant, and that’s kind of where the film loses me. Normally, I’d expect Carpenter to maintain his atmosphere throughout, but it genuinely felt like he was just wading through a range of topics, even after the children are born and growing up. It is not until a particular scene in which the children’s true potential are realized, where the eerie nature really starts to set in, and Carpenter is finally not messing around. He then puts the children under his microscope, heightening their intensity while examining their true nature in a world where people feel things when the children do not. The children are psychically related, in a way they literally personify the word groupthink. They’re able to read the mind of adults, and the way they interact with the adults are quite profound. It is from that point on even all the way to the end was I completely intrigued. Hats off to Carpenter though, he tried something a bit different, and while I haven’t seen the original 1960 film, I think Carpenter told a good story despite a bumpy ride to get to the climax. One thing though, Carpenter knows how to really end his films, and this is frankly no different, for its very profound and thought-provoking. Overall, I was very satisfied with what I got, but I definitely will revisit this, for this is unfairly hated. It’s good, interesting, and actually has a lot of heart, especially just past the middle to the end. Definitely recommend this one. This is also late great Christopher Reeve’s final role before he got paralyzed which is sad, and I haven’t see too much of his other than his Superman, but he did a great job here. If anything, watch this for him.