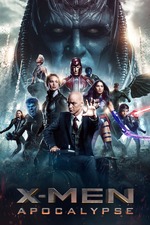 "Thank you for letting me in."

While this is certainly a follow up to Days of Future Past, this definitely doesn't live up to it. However, from day one, I always liked this. I found this pretty fun, and VERY comic-booky. It's messy and convoluted as one can expect, but it still feels like going through a major event in a comic book. Just pluck it out from the stands and start reading. You have a really fun time, and you move on. This pretty much feels that way. I have no problems with that whatsoever, aside from several nitpicks especially on Apocalypse's (Oscar Isaac and the 20 pounds of makeup and suit) character. Yet, I still had a fun time, as much as I did on opening night. Trailers were pretty cool, and I was actually happy the movie lived up to my expectations. I bought the Blu-Ray and I haven't looked back. Anyone who says this is the worst X-Men are kidding themselves when you have Origins, and even though I sorta liked The Last Stand, that one doesn't have a whole lot of legs. But this does, and I always come away happy with this one. It's good comic book entertainment to keep one busy for two hours. Can't complain.

So, let's see what the fuss is all about tomorrow with Dark Phoenix... although I'm fairly certain I'll like it anyway since I'm pretty generous with films in general.

Olivia Munn did Psylocke justice. It was her near lack of screen time that was criminal.

Oscar Isaac clearly looked limited yet he did a great job given the circumstances. Always interesting to debate whether or not Apocalypse should've shown up now or save him later a la Thanos for the Infinity Saga.

Fassbender is incredible with his catharsis as he loses his quiet life. Terrific performance while somewhat limited since Apocalypse is the clear-cut antagonist here.

Really like the finale set piece, just a fun display of powers around there. Wanted more from it though.

Jennifer Lawrence phoned it in, there's no denying. She wasn't awful but she made it pretty obvious. Just not the same level of commitment compared to the previous films.

The biggest misstep this had was that it really didn't spend a whole lot of time with characters. It was treated as an event just as comic books would, and there's nothing wrong with that. I think there's room for balance. However, I'll take this. It's fun.