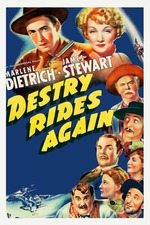 Violence isn't the answer, but it can work.

Destry Rides Again isn't the pacifist film that it would first appear to be. Tom Destry Jr. is a lawman who doesn't believe in guns. Why? To put it simply he can see how violence can beget violence. His father, one of the best lawman of the West, died by the gun. However, Destry's tactics include the use of intimidation by showing his skills with the gun (if he ever used it), and stopping people through force.

The film conveys the idea that violence can get things done, it's only when it is taken to killing that we see how violence can backfire. In order for Kent to die, a reformed Frenchy had to perish first, and Destry had to face the repercussions of his act of killing. The loss of his true love interest.

Destry Rides Again, is not, however hitting you in the face with these ideals. No character says what it should be, only the actions show the film's way. The film clearly shows a need for violence, really force, to enact change in a violent society. It does it with subtle actions by characters and even more subtle words.

The film asks for thought, it survives off it. And upon thinking about it, I have found a nearly perfect film (some jokes didn't land). One that shows almost every character in shades of grey. Thank God that this is in black and white.