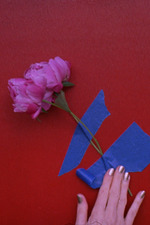 Stephanie Barber's films are often short, frequently involve just a few elements, and often involve the performance of a relatively basic procedure. For example, her classic dogs is a dialogue about insecurity and artistic production, conducted between two primitively assembled hand-puppet dogs. The film starts out as a joke, based on the discrepancy between aesthetic discourse and canine-oriented puppetry, but surpasses this easy laugh and becomes both tragic and pathetic. (A number of Barber's key works are discussed in Ed Halter's excellent essay on the filmmaker, which I highly recommend.)

3 peonies bears surface resemblances to works like shipfilm and pornfilm in its use of a rather decisive division between the image and soundtracks. Against the image of a matte red wall, we hear a man who seems at first to be speaking to a therapist about a harrowing visit to an emergency room. But soon, when the speaker starts talking about his spiritual beliefs, it seems as if she is conversing with a religious figure, claiming that some of the tenets of belief he espouses are a lie. [NOTE: Barber informed me that the recording is actually from an Art Bell radio broadcast.] Soon we see hands enter the frame and attach one long-stemmed peony after another to the wall using blue painters' tape.

Eventually, the stems are taped and overtaped to the wall and to each other, forming a crisscrossing mass of blue stripes. As the film continues, the hands (Barber, presumably) begin to tape over the flowers themselves, affixing the buds to the wall underneath the smothering bands of tape. What is left is a kind of arte povera sculptural relief, an ordinary, even stereotypical "thing of beauty" reduced to an Ace Hardware version of a Franz Kline. In essence, the aesthetic and the banal have traded places.

The film consists of a three-minute action, but Barber's framing and use of contrapuntal sound (together with the repetitive rip of the tape) organizes this performative gesture into a fully cinematic object, one with a full painterly palette. This is a tough, smart little film.