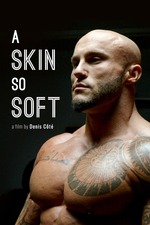 A Skin So Soft

This is probably the ideal film about the male body. Like it or not, this is what peak documentary performance looks like.

I didn't like it, though. Several of the reviews I've read have compared A Skin So Soft to Bestiaire within Côté's filmography, in terms of adopting a somewhat distanced gaze at other living creatures. But I don't think that's exactly right, because the men in this film have jobs, routines, insecurities, and the like. They are not giraffes.

And I suppose if I had an abiding interest in bodybuilding, their individual situations might have been more compelling to me -- how one man is a fitness model, while another is a Quebec wrestling circuiteer, and yet another has difficulties balancing his bodybuilding regimen with his family obligations. But context is everything, and I kept expecting Côté to bring some unexpected frisson to the otherwise banal material.

It is indeed unusual for male bodies to be objects of display. And gym culture does allow for an authorized homosocial space of intermale looking. But certain kinds of critical issues are simply going to arise by dint of the subject matter. It's hard to necessarily credit the film with highlighting these things, and if anything, Côté downplays them.

I saw a bodybuilding documentary as a part of the Wavelengths section of TIFF, and it didn't feel so different from an ESPN 30 For 30 production, is what I'm saying.