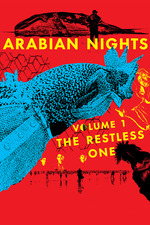 My capsule review from my TIFF Wavelengths coverage for MUBI:

Already quite possibly the most critically acclaimed film (or films) of the year, this expansive experimental blockbuster trilogy should already be on your radar as a must-see. Gomes is that rare auteur who can communicate righteous political anger with such humor and clarity that even his most strident agitprop comes off as the very model of civilized discourse. As he begins the first film, "The Restless One," with a bit of self-deprecating metacommentary about the untenable privilege of making such a film when Portugal is suffering (and to be honest, I believe Gomes's neurotic-director act must be a jab at Nanni Moretti), he explains his method: put things that are happening at the same time in the film alongside each other, hoping they will form a critique. The Scheherazade structure will be a clothesline of sorts, to permit multiple tales and formats to exist in one film, side by side. And so, "The Restless One" is an excoriating and often absurd docu-fiction about how EU-imposed austerity has actually affected ordinary Portuguese people.