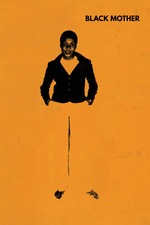 One of the major surprises of 2015 was Field Niggas, Khalik Allah's gorgeous, haunting experimental feature. It was clearly the work of someone who'd come up through photography, as it was essentially an hour-long portrait film. Roving the streets of Brooklyn, Allah showed us an image of African-American life that is often deemed too messy or unkempt to put on display: the mostly lower-class denizens of the night, those who hang out at the bus stop or outside the CVS, who shout at you as you walk by or may have slept in a doorway somewhere. Field Niggas displays both their beauty and their resilience, showing us the lines etched on faces by hard times and run-ins with the pigs. It's a singular film.

Black Mother, Allah's latest, is similar in form but quite different in content. Filming in Jamaica, where he has extended family, Allah again proffers a defiant act of cine-portraiture. But there is an expansiveness to this film that contrasts with the relative claustrophobia of Field Niggas. This is a picture of a culture in transition, and Allah cuts a wide swath through Jamaica to encompass multitudes.

The film is organized like a travelogue or a diary, shot in various formats including Super-8 and hi-def. With the exception of one single moment, there is no sync sound. Rather, the soundtrack to Black Mother is a meticulously constructed aural poem comprised of music, interviews, and atmospheric sounds of the island. The relative independence of the aural and visual information makes us aware of the degree to which we are drawing connections that are not natural or obvious, but contrapuntal.

One of the clearest influences on Black Mother is the work of John Akomfrah and the other members of the Black Audio Film Collective. Like those black-British artists, Allah has produced a collage of identities and subject positions that challenges racist notions and received colonial history. The film explores Jamaica's Christian traditions, showing them to be a dual site of conservative and progressive attitudes. Allah also, as the title implies, considers the role of femininity in Jamaican culture, the places where traditional attitudes clash with women's lived experiences.

If there is a problem with Black Mother, it is that it tries to cover too much ground. It is a sprawling film, and it gets conceptually muddy at times. Its 75 minutes, frankly, feel quite a bit longer. However, Allah is attempting something like a national epic, and in the midst of that ambition, many awe-inspiring moments do emerge. This is a film that demands, and rewards, repeat viewings.