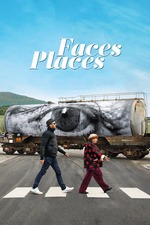 Occasionally you will see big dumb blockbusters labelled as "critic-proof," meaning that the target audience is going to go see them no matter how bad the reviews may be. But with Faces Places, I feel like we have an entirely different kind of critic-proof film. So open-hearted is this film, so disarming of all cynicism, that it is next to impossible to find fault with it.

In fact, both with the film itself and the artworks created within the film, Varda and JR show us art in something close to its Kantian ideal. JR's large-scale photocollages, adhering to the basics of representational portraiture but amping up the scale, are a model of conceptual simplicity. There is essentially only one aesthetic mandate -- "make it huge" -- and that is pleasing on the most basic human level. Observing oneself or one's loved ones expanded beyond their physical circumstance is the fundamental, time-honored signal for offering tribute.

Combine with this the fact that JR's images are ephemeral -- it's only poster stock and wheatpaste, after all -- and the circle is squared. Everyday individuals can become local celebrities, or monuments to a particular civic ideal. But the temporary nature of the work means that the humility of these ordinary people, their jobs and social circles, is built in to the tribute. Therefore there is no ego involved in allowing yourself to be enlarged by JR's apparatus. It is merely a transitory moment of expansion, beyond yourself, into the larger visual world.

And of course, this element of time, the erosion of all things, is precisely where Varda's cinema intersects with JR's photography project. A sage observer of her own mortality, Varda chooses to meet as many people as she can, to engage with the ever-shifting world, and meet it on her own terms. Her eyesight may be failing, but she accepts that blurriness is now the phenomenological essence of her vision, and works with it as is. (Stan Brakhage would be proud.) Similarly, she treats her aging body and its "limitations" as opportunities for new experience, such as zooming through the Louvre in a wheelchair.

The only moments of real friction in Faces Places come in the middle and in the end. The first is purely personal. It was hard watching Varda and JR bopping around an Arkema chemical plant, knowing that Arkema is the same company that has poisoned Houston's groundwater, with total impunity, following Hurricane Harvey. But it was the failed meeting with Godard at the end of the film that really drove a spike through the film's affable humanism.

Was this staged? Was Godard ever really supposed to appear? Who can say. But Varda certainly got something out of the missed encounter. Like Varda, Godard is an aging artist fully aware of his mortailty, and unwilling to slow his output. But whereas Varda has gone further and further outside of herself (even taking on a collaborator), Godard has retreated into his own thinking, producing masterworks of hermeticism and insularity. In absentia, Godard provided Varda with her perfect foil.