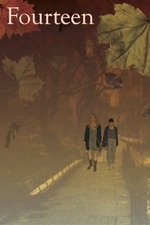 Like a strange hybrid of Pialat and Bergman, Dan Sallitt's new film explores the vicissitudes of a close, possibly codependent relationship between two women over the course of many years, observing how changes in life trajectory, as well as fundamental differences in their personalities, gradually pry them apart. Mara (Tallie Medel) and Jo (Norma Kuhling) have been friends since grade school, when the tall, aggressive Jo stood up to bullies on Mara's behalf. But as we learn over the course of the film, the two women, despite coming from similar socioeconomic backgrounds, developed very different skills for coping with the demands of the everyday world. And into adulthood, Mara eventually became an emotional backstop for Jo's continual collapses in mental health.

Time is both elastic and doggedly material in Fourteen. From one scene to the next, months or even years can elapse, with the passage of the women's lives marked in missed appointments and boyfriends who come and go with little explanation. But one constant remains: Mara is doggedly working her way through the paces of a career in elementary education, from teacher's aide up to a permanent classroom position, while Jo, after getting fired from numerous jobs, bounces from crisis to crisis, some related to the men in her life, others to alcohol and drugs. In one key scene, Mara, ever the fixer, tries to help Jo identify some originary trauma that might have set her life going in the wrong direction, and the best Jo can come up with is the death of her cat when she was a girl.

In other words, Jo is simply someone who is constitutionally unequipped for the adult world, and her complex sense of pride and self-destructiveness makes her spurn almost any attempt to help her. At times, Mara rearranges her own life -- visits with her mother and crucial discussions with her partner Adam (C. Mason Wells) -- to be at Jo's emotional beck and call. But Jo refuses to remain on medication and distrusts doctors and psychiatry. So as Mara's life hits a crucial turning point -- pregnancy and the birth of her daughter Lorelai -- she must find a way to break the cycle with Jo, however painful that may be.

This could be the sum total of Fourteen in itself, but Sallitt wisely shows us the painful, awkward aftermath of Mara and Jo's "separation," running into each other on the street and making plans the two of them know will never be kept. In subtle ways, it's apparent that without Mara around to fill out paperwork for Jo, or act as a go-between for Jo and her parents, her former friend is drifting even farther into irreversible disarray. But there simply isn't room in Mara's life anymore for such a unilateral time-suck.

There's a sense in which describing all of this makes it sound both universal (a situation all of us have experienced at some point) and utterly banal. But without undue melodrama or exaggeration, Sallitt (with the help of his two exquisite lead actresses) presents this scenario as a kind of plainspoken tragedy, something that is simultaneously recognizable and intensely specific. We understand the appeal of the fun, attractive, troubled Jo even as we know that she is bad news, and we empathize with her while maintaining Mara's point of view, affirming the necessity of her wrenching decisions.

There is a formal principle at work also. As with Sallitt's other films, like The Unspeakable Act and All the Ships At Sea, even the hardest-fought expressions of feeling are delivered in a calm, restrained manner, as if typical American boisterousness were tamped down to reflect a more European civility. Jo is the exception to this, and so in a way she does not "fit" in the film or in the world it depicts. Her apartment is haphazard while most of Sallitt's mise-en-scene is clean and neutral in a Rohmerian vein. Many critics have cited Kuhling's performance, and rightfully so, but I wonder if this is because her histrionics are more in line with what we expect "film acting" to do. (And even within this framework, Kuhling is quite restrained.)

Fourteen takes its title from the age when Jo feels that everything in her psychological world first started going wrong, when something in her changed. In this regard, Sallitt is showing us a particular trajectory of events, leading to a tragic end. But perhaps all of this could have been avoided. If Jo had received some sort of help at 14, instead of having to build an entire personality around her illnesses, she might have had a different life journey. And so in the end, Fourteen is about the lives in our world that simply, sadly fall through the cracks of society, and the pain of those who love them but ultimately can't do anything but helplessly watch.