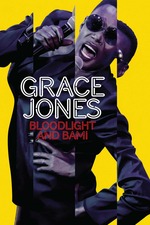 Sophie Fiennes is fast becoming the queen of biographical documentaries, having already produced unique profiles of Slavoj Zizek and Anselm Kiefer. With those films, however, the cultural eminence of their subjects wasn't something that audiences needed to be convinced of. By contrast, Jones was someone I never really thought about very much. While many of us remember Grace Jones as a disco diva and an 80s scenemaker, I cannot be alone in being unaware of the full range of her artistry.

Bloodlight and Bami is a striking open-form documentary that makes a powerful cumulative argument. After watching Jones at work (mostly on her last studio album, Hurricane), in performance, and among her family and friends in Jamaica, a complex picture emerges of a serious artist with a singular vision, someone on par with contemporaries like Laurie Anderson and David Byrne.

Where she differs, of course, is that her work is deeply sensual and embodied rather than overtly intellectualized, even though Jones clearly orchestrates every sonic and visual element for maximum effect. Her connection to world music, particularly reggae and Europop, also positions her between the dancehall and the concert hall, and Jones fully exploits the central intersection of that Venn diagram, not only in her music but in her personality. (One of the most interesting aspects of the film is watching Jones code-switch, speaking heavy Jamaican on the phone with Sly Dunbar and Robbie Shakespeare one minute, deploying near-perfect French on a Parisian TV set the next.)

Fiennes' organization of Bloodlight and Bami capitalizes on these many facets of Jones' style and character. The recording sessions and the private moments are almost like dialectical elements that converge in the stage performances, a union of disparate selves. But it's all Grace, and this film serves as a reminder that some of us were fools to have ever taken our eyes off of her.