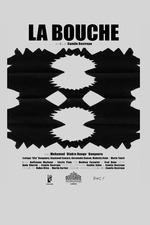 If you happened to have seen Camilo Restrepo's previous film Cilaos, you have some idea of what you're in for with La bouche, aka Mouth. With not a lot of work under his belt, the man has an immediately recognizable style. Based around performances by African musicians, shot against a pitch-black background, both films resemble retro music videos / Scopitones from the 1960s or 70s, or the ways that musical acts used to be staged for maximum drama on TV shows like "The Smothers Brothers Comedy Hour."

La bouche is an ensemble piece with a bit more of a narrative than Cilaos. It even includes a single set, an old man's hovel. The film begins with an extreme close-up of a woman dancing furiously, a bit reminicent of Rosie Perez in Do The Right Thing. Her movements exceed the frame, making her look like pure kinetic force. She is joined by another woman as the camera pulls back, and they start to sing.

The singers and three musicians start to tell the tale in song. A man's daughter has been killed. What follows is a kind of primal distillation of Hamlet, as the girl's father is goaded into action but is so overcome with grief and confusion that he cannot act. The father is played by Guinean percussion master Mohamad Bangoura, popularly known as "Diable Rouge."

Restrepo lets the tension mount to the breaking point, and then, when Bangoura's character decides it is time to act, the Red Devil unleashes a mindblowing torrent of percussion so complex that, if you weren't watching it yourself, you might not believe it was issuing forth from a single human being. It is nothing short of liberating.