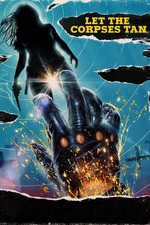 My first go-round with Cattet and Forzani, not because I deliberately skipped Amer or The Strange Color of Your Body's Tears, but you know how it is. While I am getting the impression from reviews that Let the Corpses Tan is a bit atypical, with its extensive reliance on gunplay, I still feel like I get a sense of what this pair is about. Color me intrigued.

It would be easy for Corpses to lapse into postmodern pastiche, since it's fairly clear that Cattet and Forzani are dipping into very specific cinematic histories. There's a little bit of French and Italian horror, giallo, B-grade sexploitation, some spaghetti Western, and quite a bit of Japanese outlaw cinema, all baked right into the crust. While it sounds like the earlier two films owed much more to the likes of Mario Bava and Jess Franco, this one reads like Sergio Leone as refracted through Seijun Suzuki. (Although Let the Corpses Tan is a pretty sweet title, they might've gone with Pistol Opera is Suzuki hadn't already taken it.)

But there's a subtle but crucial difference between Cattet and Forzani and other Eurotrash revivalists. Yes, it's possible to perceive the influences, but they are just that. The disreputable B pictures offer certain formal possibilities -- jagged edits, dramatic wide angle cinematography, extreme close ups, and an expressionist use of color -- that both commercial and art cinema never really explored any further. Corpses isn't an exercise in nostalgia so much as a rejoining in progress, an exploration of those largely untapped potentials.

There's a plot, and there are some characters. But it's nearly impossible to keep them all straight in terms of allegiances or even names. Instead, the performers are points on a graph, locations to and from which ordnance flies, and whence exploding squibs may squirt. In other words, Cattet and Forzani see their actors in absolutely formalist terms: eyes, hands, breasts (in the case of guest star Elina Löwensohn), beads of sweat, things that can shoot or be shot. And there's no guarantee that the blood will be red once it hits the screen.

Genre is just a canvas, and it's the splatter that matters.

Top of the Lake: China Girl