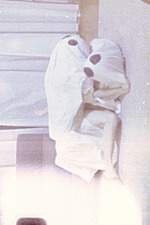 My capsule review from my TIFF Wavelengths coverage for MUBI:

One of the very best films in Wavelengths and possibly one of the year's best films overall, Joshua Solondz's Luna e Santur is in equal measure mysterious and disturbing, seductive and repellent. Characterized by an aggressive flicker, Luna doesn't make its images easy to parse, and in fact obscures them through skeins of surface scratches, paint swipes, and other thickets of distress. These medium-specific elements form a kind of architecture of twisted-metal perception which, together with the flickering, half-life absence of the figures under scrutiny, makes for a prison of visual distance, the figures on display locked firmly apart from us in an isolated and inexplicable world.

And what is this place? We continually see two figures draped in white sheets cut with eye-holes, the classic Halloween ghost costume but here more sinister, as if the point is to obscure identity in films that should never have been shot. The figures are in some sort of room, faded and beige like an indeterminate porn set in the 1970s, which is appropriate since the two people grapple with one another in highly ambiguous ways. If we got a clearer look, perhaps we'd know if they were fighting or struggling to have sex, or if the relations on partial display were consensual. From what we do see, however, there is an unnerving sense of ritual, as if these draped bodies have been condemned to do this over and over again, a kind of Sartrean Abu Ghraib.

Joshua Gen Solondz has made a number of solid films, but he has been working, I think, to find his own distinctive voice as a filmmaker. Luna e Santur marks the arrival of a major artist.