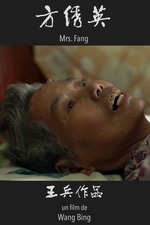 After the somewhat troubling Ta'ang, which (I thought at least) found Wang's direct-cinema tendencies getting the better of him, China's best-known documentarian -- and possibly its best, though I'm not qualified to say -- returns to the intimacy that has always been his strong suit. Mrs. Fang is simultaneously an end-of-life study, in the vein of Wiseman's Near Death and King's Dying at Grace, and an indelible piece of portraiture.

And what a portrait it is, layered with both pitiless, Warholian objectivity and the humanist, there-but-for-the-grace-I-go tenderness of a real-time piéta. Even as we observe the family of the elderly Fang Xiuying assemble around her bedside in her final moments, reacting to her imminent passing in various ways, there is no single takeaway from Wang's film stronger than the extended passages of the infirm Fang in close-up, her body rendered mostly immobile and struck speechless by Alzheimer's. While her mouth is frozen open in a fixed, puppet-like rictus, mysterious expression is unmistakable in her eyes, only deepening the tragedy of her situation.

As for her family, Wang is very clear -- perhaps a bit too much so -- in displaying the grinding difficulty of caring for an Alzheimer's patient over the long term. Her adult son and daughter, along with assorted other relatives, tend to Xiuying even as they take it for granted that she cannot understand anything that is being said. So they vent their frustrations, noting aloud that it cost 1000 yuan a day to care for her, or discussing what to serve at her funeral. And in the midst of this extended infirmity, life must go on, something Wang displays in the form of several gorgeous night-fishing sequences. (The family lives in Maihui Village in Huzhou, along the Yangtse delta and approximately 150km from Shanghai.)

If there is a sense of frustration that the family evinces with Xiuying's slow exit and the collective burden in represents -- and in a way, who can blame them? -- all such thoughts evaporate in the face of her final moments. Some relatives cling to signs of life, like the twitch of an eye. Others simply hold her hand, content to ease her out of this world. Her son resents that the grandson isn't there for her, and says so quite frankly. But what Wang shows quite clearly is, no one for a moment mistakes the gravity of what is happening before them. As the burden lifts, Xiuying's family starts to see her again, as the person she had been in all their lives, and not the woman who remained while slipping further and further away.