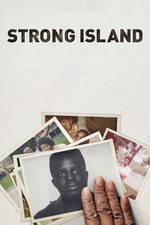 Yance Ford's quiet, sorrowful documentary is both an investigation and a memoir, wherein he struggles to piece together the details of the murder of his older brother William. Part of the anguish that is sewn right into the film is the fact that the Ford family's long-term grief is also ours. Why should an inquiry into a 25-year-old crime seem so timely? The answer is sadly obvious: African-American men are gunned down in America, with impunity, as a matter of course.

But William was not just another victim. He was Yance's brother, and in a media landscape given to turning dead black men into statistics, Strong Island is about the absolute singularity of the Fords and what this crime did to them, and Yance in particular. The film opens with Yance trying to get the prosecutor in the case to speak with him, and being blown off in no uncertain terms. And this just sets the tone for the film to come. Only the Fords feel there is more in this closed case that needs to be discussed.

The details of the murder are gradually introduced amidst the more intimate, less painful elements of the Fords' family history. Rather than organizing Strong Island as a true-crime procedural, we see how William's death has become agonizingly woven into the fabric of their lives. We often hear about the need for "closure," but when the very fact of systemic racism helps set a killer free, what would that closure even look like?

And then, there is the question of how that racism, and the anger it provokes on a daily basis, may have been a factor in shaping William as a personality. In a manner unlike any documentary since Capturing the Friedmans, Strong Island continues to unfold with increasing layers of complexity over its running time. While Yance is clear that William did not deserve his fate, the elaboration of the circumstances surrounding the crime reveal certain decisions that, when taken within an overall framework of racist fear, may have led to his demise. (In other words, William forgot that white people are dangerous.)

The title, of course, is slang for Long Island, NY, where the Fords grew up. Their parents, solidly middle-class, ostensibly belonged there, as did many upwardly-mobile African-Americans. (Their father was a subway driver; their mother was a teacher in Rikers prison.) But as Yance explains, Long Island suburbs were fiercely segregated, offering a glimpse of the tragedy his family would experience later on.

If you have to be deathly afraid of your neighbors, then all you have is family. You'd better be a "strong island." But as Yance discovers a bit too late, even family members can never entirely know one another. To some extent, everyone is an island to themselves. Strong Island is his bold gesture of opening his experiences to the rest of us, forging a crucial connection in isolating times.