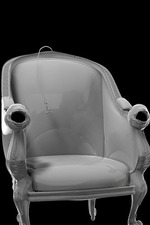 From my TIFF Wavelengths coverage for MUBI:

Clark’s films are always evocative and a bit mystifying, given that her compositional method is typically nonlinear and constellational, oriented around a particular set of concepts rather than a recognizable set of formal concerns. The Glass Note is no exception, and like many of Clark’s other works, The Glass Notes rewards repeat viewings. Luckily, Clark is a consummate maker of images, so even if one comes away feeling like you may not have entirely “gotten it,” there is no doubt that you’ll come away from The Glass Note with several bewitching visions embossed upon your psyche.

But in particular, The Glass Note is about sound and resonance, along with the various relationships between the aural and the haptic. Beginning with a close-up on a vocalist’s throat while laser beams zero in on her larynx, the film tells us about lithophonic stones (rocks that conduct sound), then implicitly comparing them to the shiny, patina-coated parts of statues that are worn down by touch. These two senses, sound and touch, are brought together in the film’s title, as we see someone generate a musical note by playing the rim of a partially-filled wine glass.

While not everything in The Glass Note is reducible to one dominant theme, Clark keeps her various elements suspended in definite relation to one another. Ultimately it is the film itself that provides the broadest context, since Clark is drawing our attention to cinema’s distance from the spectator’s body, and the way that sound is the only element of cinema that even comes close to palpating our bodies as we watch. This is a highly phenomenological film about cinema’s basic disembodiment.