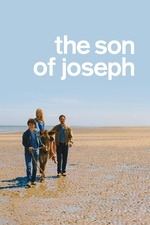 Although the primary focus of Eugène Green's newest film is an ostensibly fatherless boy, Vincent (Victor Ezenfis), and his quest to locate the source of his mysterious paternity, there is a secondary set of themes involving the demimonde of high-powered French publishing. (In this sphere, Vincent's biological father Oscar, played by Mathieu Amalric, is a prominent fiction editor.) Amidst the book launch parties and public readings, we meet Violette (Maria de Medeiros), a literary critic.

She fawns over Oscar and behaves like something of a flibbertigibbet, channeling the haughty journalist figures Katherine Hepburn once played but with half the gravitas and none of the facts. ("I scribble reviews in the Literary Lift. You read it, no doubt?") At one party Violette coos, "I just spoke to Nathalie Sarraute," to which Oscar deadpans, "she's dead."

We can compare this to Vincent's trip to the Louvre with Joseph (Fabrizio Rongione), Oscar's brother and the petty thief who will become Vincent's surrogate father. Even as they walk through this palace of "dead" painting, they are inspired by it in real time, and Green takes care to linger on individual canvases by Georges de la Tour and Philippe de Champagne, in whole and in part. This echoes the large Caravaggio poster that Vincent has on his wall, and tells us something about Green's attitude toward art in general.

Green's division between Joseph and Vincent on the one hand, and Oscar and Violette on the other, could hardly be clearer. Art is either to be loved and learned from, or to be traded, commodified, and gossiped about. As for Vincent's mother Marie (Natacha Régnier, who is particularly great in this), she almost exemplifies this kind of movement, from someone who was once taken in by the lure of style and success (Oscar); once burned by that superficiality, shut down; and then, with Vincent's help, is now opening up to something more genuine (Joseph).

We know from previous Green films, such as La Sapienza and The Living World, that Green favors the Baroque to other periods, particularly the contemporary. This may seem backwards-looking, but one could argue (as Deleuze has) that the Baroque offers plenty of untapped potential. Since it is typically a mode that is positioned between dramatic movement and medium-specified stasis, in some ways it prefigures the invention of cinema in 1895.

It's possible that Green's loveingly stilted Bressonianism is another way in which he pays homage to the paradox of the Baroque, since the characters who are of most concern here (Vincent, Joseph, Marie) are the least dynamic, most poised between cinematic movement and frozen time of statuary. By the end, they are "liberated," crossing the screen and roaming down the beach. But arguably, having achieved the status of Holy Family, they are outside of human time altogether. So perhaps in Green's odd Baroque universe, movement is for those who transcend. The rest of us are stuck in the rat race of the profane.