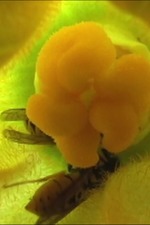 Part of what has been so remarkable about Dani Leventhal's recent video work is that she is uniquely capable of producing dense, evocative juxtapositions through montage. But what makes her editing so unique? Putting one image / sound unit against another has been a fundamental principle of cinema pretty much since the beginning. (Well, okay, that sound part came a bit later. But even Sergei Eisenstein, master theoretician of montage, welcomed the sound era, noting that when applied contrapuntally, the aural dimension could be another element in the clash of sensory dialectics.)

Leventhal's work is rare in that she is able to produce relatively short works that incorporate images and sounds that are collected from daily life, as well as material that is rather blatantly staged. However, by treating this material as an occasion for formal articulation -- examining it not primarily from the standpoint of its contents, but in terms of overall shape, movement, gesture, temperature, and underlying tone -- Leventhal succeeds in giving this highly varied footage equal weight. In so doing, Leventhal forms a new context, the piece itself, in which each individual image and sound has a firm belonging that supercedes its denotative content.

At the same time, Leventhal does not select or arrange footage in such a way that it actively suppresses content. It's not just that she tends to avoid purely abstract images; it's that the facticity of what's onscreen retains its poetic valence (even as it tends to avoid narrative meanings). Tin Pressed is a perfect example of what Leventhal does. It's a piece that generally operates on a spatial / compositional basis, orchestrating gradual motivic elaboration.

For instance, the start of Tin Pressed relies on either a form holding the center of the frame as a nucleus with action swirling around it (as in the first shot of Leventhal on the concrete, being kicked by unseen assailants, and the second shot of wasps inside a yellow flower) or movement around an empty center (as in the fourth shot, with bait sardines whirling in a water bucket). The subtle shift in orientation created by the bobbing fish takes us from circular motion to perpendicular stasis; the brief fifth shot of a Virgin Mary icon is quickly supplanted by Leventhal's bare back as she's mashed into a mammogram machine.

This shot holds for quite a while, until it in turn is replaced, by a side of beef hanging in a butcher shop window. (Admittedly, this is a bit too on-the-nose, not the sort of thing we usually see in Leventhal's videos.) Nevertheless, what we see at work in this compact video is Leventhal's ability to ask us to think in terms of shape and form (as well as gently colliding ambient sounds) while forcing us to grapple, in predominantly non-narrative and non-symbolic terms, with the actual stuff from her image-world. Leventhal is essentially reviving a modernist poetic vein in experimental cinema, and the fact that she's doing it with video is, I think, more of a radical gesture than we might initially think.

I've compared Leventhal's editing style to Nathaniel Dorsky before, and I stand by this. But Dorsky is the ultimate 16mm diehard, pushing all his films to the limits of the medium's ability to record perceptible light. Leventhal, for her part, certainly explores digital's tactile potentials. (See shot three, the haptic close-up on an elderly neck.) But if Dorsky's adherence to film and its fragile light tends to imbue his films with a sort of holiness, Leventhal's work insists upon its connection to the quotidian. This is bold, in part because it goes a long way toward making poetry "strange."

[Tin Pressed can be viewed here.]

Being Elmo: A Puppeteer's Journey

Turn Me On, Dammit!