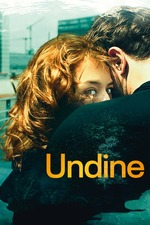 As I was watching Christian Petzold's latest film, I found myself thinking of an oddly appropriate French / English pun. Historically, French newspapers contain a section of short, random news stories of sometimes-lurid human interest. This section is called the fait-divers. It literally means "diverse facts," but colloquially just means "miscellaneous."

Undine is the sort of story that belongs in a cinematic fait-divers, and not just because it pertains to the fate of divers. For all its formal elegance, this is minor Petzold, mythological footnote used as the basis for a sort of romantic fable. The film trucks with the supernatural without ever really committing to it, and while this could be considered a play for ambiguity, it really scans as more of a narratological feint.

This is another of Petzold's engagements with the pliability of genre. But some of his more complicated films such as Jerichow, Barbara, and Yella all refer not only to specific genres but individual films (e.g., Carnival of Souls or The Postman Always Rings Twice), and by the time he had reached Phoenix and Transit, Petzold was dealing with these problems more theoretically, alluding to Vertigo or The Passenger without needing to fully adopt their plot structures. In a sense, Undine is a lateral move, taking the mythological sea creature of the title as a basic refrain for the film. Where Transit employed multiple temporalities (World War II / present day) to create discontinuity, Undine moves between the realistic and the fantastical realms.

As it happens, this proves to me a less compelling project, in part because it is not particularly original. Undine is never less than compelling, largely because Petzold's images and editing, along with the magnetic title performance by Paula Beer, infuse the film with an interest value that a lesser director's work wouldn't command. And yet, the end result is a bit like watching a mid-career Mozart "arrive" at "Mary Had a Little Lamb," on the assumption that the text will be richer for having a master's experiences behind it.

The overt text of Undine, in fact, resembles that ubiquitous meme of the guy walking with his girlfriend who looks over his shoulder at the other woman passing by. Undine (Beer) is left by her lover Johannes (Jacob Matschenz), she pleads with him to stay, but then she moves on and falls in love with diver-welder Christoph (Franz Rogowski). At the height of their happiness, the couple pass by Johannes and his new lover on a bridge and Christoph catches Undine looking after him, setting in motion a series of tragic consequences.

If we give Undine its most generous critical reading, it would probably go something like this. This is a film about surface and depth. Christoph does his work underwater, Undine may be a creature from the sea, and perhaps more importantly, Undine is an architectural historian who articulates the continuities and discontinuities between divided and reunified Berlin. On the surface, the wall split the city, but underground, at the core, there remained unity -- one that a sea creature could experience in a way surface creatures could not.

So to take this further, Petzold lays meaning out very blatantly in Undine, combining melodramatic elements with myth and history. Does one set of meanings "underlie" the other, providing a subtext? Or is everything just adjacent to everything else? It's an interesting set of questions, but I suspect I wouldn't much like the answers.