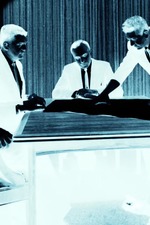 There is typically a unique combination of dream logic and 1940s / 50s "lost" imagery in Geiser's films that serves as their energy core. They are distinct in this regard, however, from Lewis Klahr's films in that the space between the images -- the "room to dream," if you will -- is much more considerable in her films. To use a baking metaphor, Geiser's films are lighter and airier, whereas Klahr's are closer-textured, which is why his sometimes suggest a narrative throughline whereas hers almost never do.

That's why Valeria Street was such a shock upon first seeing it. It's probably the most direct Geiser film I've seen. Its recurring images so clearly lead up to a dominant metaphor. In it, we see a group of men in suits sitting around a conference table, working on plans. Alternately, we are shown overlays of blueprints and a set of three-dimensional figures (cubes, cones, etc.), line drawings whirling in space. The overall sense is one of masculine control over space, of an all-encompassing universe under the benevolent but unavoidable domination of the patriarchy.

But reading about Valeria Street complicates matters. It seems that Geiser has made the film using slides she found of her own father, one of the members of the presentation team depicted in the recurring images. So if there at first appears to be a rather one-dimensional concept behind the film, this is both deceptive (there's a lot more going on than meets the eye) and understandable (Geiser is closer to these images than usual and they are likely to have certain emotional valences for her).

The net result, I think, is a transitional work, one altogether less abstract but potentially more evocative. I would be curious to see if Geiser returns to these images in subsequent films.