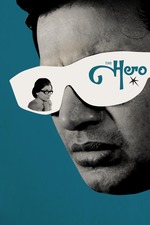 "The throne is there". "I have been overthrown".

When I watched Federico Fellini's 8½ 3 months ago, I wondered if that kinda film was ever made in India and I didn't dwell on it much back then, but today I got what I craved for when I discovered Nayak on its 54th anniversary! 8½ and Nayak would make the ideal double feature, with the former focused on digging deep into the relationships and guilt of a filmmaker suffering from writer's block, whereas the latter incisively dealt with the insecurities of a "star" and the art of not being able to let go some things in life no matter what heights you scale and both use similar narrative tropes of recurring flashbacks/dreams.

So many conversations in the film still hold up even today that renders a timeless quality to this 1966 masterpiece and to put it frankly, I can't even guess an approximate time when someone asks me what year do you think Ray's film like this was filmed in had I not known the release year beforehand, because he was wayyy ahead of his time.

I heard so many things over the years about legendary Uttam Kumar's matinee idol status as "Mahanayak" and now I totally get the reception after watching Nayak. He's "got the looks", "got the voice" and despite playing the role of a huge star, he keeps the role grounded in a sense that makes him too cute to handle, especially in his scenes with the formidable "Miss Modern Woman" Sharmila Tagore and their (conversational)chemistry is so alluring so much so that I want to see a full-length love story with both of them as leads! (Suggestions are welcome) Also, I liked the use of black glasses/sunglasses rhetoric for both, more prominent in the case of the hero that signifies a sense of impeding vision.

Despite having such a towering screen presence capable of holding the frame/light, just like how a star shines in the dark, Uttam Da shines well and truly during the scenes where the star is at his most vulnerable position in darkness, dreams for instance. The surreal imagery in line with the film's theme and the emotional impact present in both the dream sequences are among the best film dream sequences I've ever seen, plunging me right into another world of the delirious human mind just like the iconic dream scene in Kurosawa's Kagemusha and sequences like these reaffirm my faith in Cinema's unique ability to filter subconscious unlike none other!

All-in-all, thank you "Manik-Da" for giving yet another gem to "keep in my memory"!