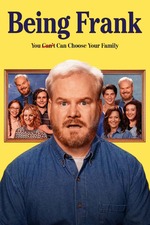 "Miranda Bailey’s Being Frank has the contradictory feeling of being both overcooked and undercooked. And if that’s not enough of a mixed food metaphor, it’s also been seasoned in a way that’s totally unexpected but nonetheless off. Part horndog 80s sex comedy, part mistaken identity screwball comedy, and part sincere ethical inquiry, it’s a film that leaves a terrible first impression and a bittersweet final moment and one whose merits are all but trampled by its missteps. But if one is able to look past its pinballing tone, rough narrative framing, and erratic humor, they’ll find a film that’s much more thoughtful about double lives than its appearance.

Philip Hansen (Logan Miller) is the son of Frank Hansen (Jim Gaffigan) – well, at least one of them, as it soon becomes clear. As seen in the opening scene, Frank is a taskmaster, forcing his son to do a mock interview for a summer position at his own Ketchup company and serving as the model of the helicopter parent (that is, if the helicopter parent also took regular week-long vacations to Tokyo). Emotionally estranged from his father, his relationship with his mother, Laura (Anna Gunn) is characterized by an inability to do anything he wants to do. In this case, that’s going to his best friend, Lewis’s (Daniel Rashid) uncle’s lake house to drink and lose his virginity.

After sneaking out with a lame excuse about studying all weekend at Lewis’ house, their dream vacation is quickly dispelled as they realize Lewis’ uncle Ross (Alex Kaprovsky) is a depressive burnout who spends all day with his gravity bong in the dark. Things are further complicated when Philip sees his father (who’s supposed to be in Tokyo) at the pool embracing a teenage girl.

Far from a “Lolita” scenario, this is the inciting incident for the rest of the movie, as Philip follows Frank and discovers his second family made up of his wife, Bonnie (Samantha Mathis), daughter Kelly (Isabelle Phillips), and son Eddie (Gage Polchlopeck). This is enough of a shock without the knowledge that Frank is an entirely different kind of parent. He’s almost fun, allowing his kids to drink in front of him, ignoring curfews, and being far more hands-on with each of them."

Read the rest of my review at The Spool: thespool.net/movies/2019/06/being-frank-review/

Hara-Kiri: Death of a Samurai