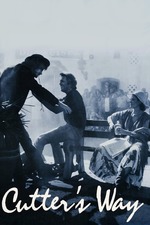 A jetty of 70’s cinema jutting into the unfriendly waters of the dawning Reagan era. Alex Cutter (John Heard) is a Vietnam veteran with physical and emotional injuries — he’s missing an arm, an eye, walks with a limp, and is a raging alcoholic — and refuses to go unnoticed in an America bent on forgetting the inglorious reproof of exceptionalism he embodies. Richard Bone (Jeff Bridges) is far more palatable to the culture at large, a part-time sailing instructor and full-time slacker welcomed at all the whitest Santa Barbara parties thanks to his thoroughbred physique, easy sexuality, and discretion. He also lacks interest in forming attachments, though as Cutter’s best friend from before the war, he has the uneasy job of keeping Cutter out of trouble, or at least shielding him from the worst consequences of his drunken binges.

If this assignment keeps him close to Cutter’s wife, Mo (Lisa Eichhorn) it’s probably not a coincidence. During the trio’s endless hangouts, Mo and Bone’s mutual attraction is plain to see, and Cutter, whose war injuries have also left him impotent, professes not to care if they start a sexual relationship. All three know he doesn’t mean it, because Bone, despite his languid air of indifference, has a trace of love for Cutter, and it’s about the only thing keeping Cutter from killing himself outright. Like a lot of Cutter’s gestures, inviting Bone to sleep with Moe is a provocation; he’s daring Bone to go so low, to be the one responsible for completing Cutter’s degradation.

Heard’s performance initially strikes us as broad, grating, and tiring, aligning our feelings about Cutter with, say, those of a typical diner patron subjected to his rants. Why won’t this drunken fool shut up and let us enjoy Jeff Bridges’ handsomeness in peace? Director Ivan Passer’s strongest accomplishment is to help us see things Cutter’s way, which, of course, we always should have done. The injustice visited on him by his country is horrifying; his culture’s willful blindness to suffering like his is galling. Even so, it takes the intrusion of a dramatic neo-noir twist to push us into his camp.

Late one night, Bone sees a man disposing of a young woman’s body in a back-alley garbage can. Shortly thereafter, at Santa Barbara’s Founder’s Day Parade, he realizes aloud that the killer looks a lot like the town’s leading citizen, oil magnate J.J. Cord (Stephen Elliot). This enrages Cutter, and infuses him with a sense of direction he hasn’t had in years — elites will not get away with literally throwing away other people’s lives on his watch. Bone, whose pedigree and air of entitlement grants him access to Cord’s world, reluctantly agrees to make inquiries. (It’s nearly shocking to see how comfortable Bone looks in jodhpurs while spying at a polo match.)*

Bone struggles to stay with it. Such a pursuit is at odds with his laconicism, and the world continuously tempts him with chances to chill in perpetuity. To wit, his ersatz boss at the boatyard, George Swanson (Arthur Rosenberg) keeps offering him a full-time job to, essentially, stand around and look good. Yet his carefully cultivated purposelessness is a form of self-destruction as potent, in its way, as Cutter’s flaming nuttiness, and Bone, fitfully, begins to realize it.

Does this mean he won’t make some reprehensible choices on his way to doing the right thing? Will doing the right thing even look right to a world so accustomed to its own wrongheadedness? Hardly. Cutter’s Way, like Cutter himself, is messy and lurching, and, as it builds to a hyperbolic climax, can strain credulity. Then again, so did the America of 1981, with a celebrity in the White House and armies of white men shouting down those who would call attention to the country’s worst sins. Shit, Cutter, I guess you were right.

* I certainly didn’t realize until now that The Big Lebowski, which I’ve seen a billion times and features Jeff Bridges as a California slacker infiltrating the halls of power with the help of an unhinged Vietnam veteran, is in such direct conversation with Cutter’s Way. Time for an educated rewatch.