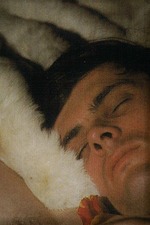 It's difficult to know how to write about this, as so much of the mystery that is Markopoulos's films is due to the fact that they're literally unknowable, due to being pulled from circulation by Markopoulos himself before his death, a desire to let his only work be a re-edited, 80 hour 'magnum opus' that re-edits and compiles some 55 new films, Eniaios.

The details of this are magnum opus are not impossible to find, but unless you want to travel to Greece every 4 years (and you've already missed the first 3 or 4 chunks), the film is, at the moment, literally impossible to see (and while it's finished, the entire film hasn't been printed). Beavers, his lover, works tirelessly traveling with a set number of films between each Temenos screening, but they seem to only travel to various European cities, New York City and Los Angeles. There are a mere handful of much earlier films available to the public by way of DVD collections, and while I've always found the work satisfying, I was not quite prepared for what I saw here, something, one would assume, as being much more indicative of a mature Markopoulos. The editing itself is what makes the film move beyond, an intensive flash of knowing contrasted with an impossible sense of unknowing, of non-knowledge. Like an ecstatic bursts, pushing away from the intended narrative trajectory;

There's the issue of course with what Markopoulos purports the film to be about. Which is, supposedly, gender. But there's nothing overt about gender here. What Markopoulos uses to signify gender in 1967 now reads merely as signifying homosexuality, and a specific idea of a homosexual zeitgeist that was visible and knowable in 1967. Reading a film against its creator's intent seems a necessary part of the experience of watching this film in 2018, as Markopoulos himself, before death, wanted these earlier, isolated films withdrawn. Erased. The work always lives on independent of the life of the creator. This is both the blessing and the curse of being an artist.

But in this case it adds to the atmosphere: knowing that you're watching something that the director intended to disappear. He wanted the film to be unknowable, to perhaps only be a memory from those who have seen it (as of course, there were no home videos in the late 60s and early 70s before Markopoulos left for Europe). The film as a whole works because of the sense of mystery, the edge it places itself upon.

I've mentioned when writing about Martine Rousset before that her films, for me, evoke a similar feeling to that of the written work of Anne-Marie Albiach. This, perhaps, even more so. And perhaps this film itself is the most apt comparison, between the near 'theatrical' feeling of Markopoulos's signifiers and Anne-Marie Aliach's theater of the page in Mezza voce. The sense of space, the violence of the cuts. The brevity of certain passages, ideas. This could be further pursued, an easy comparison could be extended, but it would be demeaning to both works. The film should be seen as its own unique and unknowable object, beautiful and moving at times, deadening at others. The film exists best on its own, as something that almost feels like a cinematic dream you're having even while you're in the middle of watching it, holding itself apart, just away from touch.