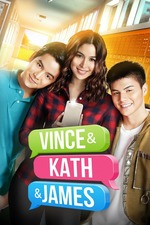 The good:
- FINALLY, a Filipino love story that doesn’t involve the “I have my dreams!” “But what about me?!” or the rich-boy-poor-girl-forbidden love narrative
- The plot though was common (kinda reminded me of Sierra Burgess is a Loser lmao) but cute! It actually reminded me of my own college days :)
- Joshua and Julia’s chemistry is insane uwu there wasn’t a scene between the two of them that didn’t make me smile
- Great now I miss my college years

The bad:
- There were two problematic scenes that, in my opinion, were careless. The movie came out in 2016, not too long ago, so they should have been aware of these, particularly 1) I felt that Kath (Julia) was sexualized in that scene where Vince (Joshua) had the car fixed at the car shop. What was the point of all those shots of her and the way Joshua’s character was looking at her? and 2) the scene where Kath & Vince’s classmate (his name escapes me now) was revealed to be gay. They were making it a laughing matter, aka the typical reaction many of the lgbt+ members get when their identity is revealed. Again, what was the point? Careless and insensitive.
- Ronnie Alonte cannot act Jesus Christ someone get him out of there please and give him lessons
- Maris Racal’s character was so annoying I lit rally had to mute my laptop everytime she started screaming

Anyway! If you just need a feel good movie, this should be good enough to lift your spirits after a bad day. It’s not as unique and amazing as they say, but it’s still a good watch.