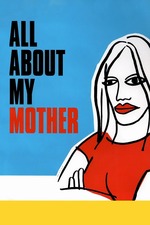 All About My Mother is a Spanish dramedy by Almodovar that, while visually beautiful, felt so much like a telenovela that I quickly found it tiresome. It's a meandering, sometimes convoluted story involving transvestite prostitutes, drug addicted actors, and a pregnant nun with HIV, and when put in this simple context, it sounds utterly ridiculous. Fortunately, Almodovar is a rather talented storyteller and he manages to weave these aspects into a narrative with a degree of taste and poise. Thematically, we're presented with questions of identity, loss, acceptance, redemption, and a fixation with becoming someone you're not. And though this is a melodrama by definition, it really is just a little too over the top and quickly loses a lot of its believability.

I think this is what hurt the film the most, because all the other aspects hit their marks quite well. The script isn't bad and the cast is good throughout, with especially strong performances from Cecilia Roth, Marisa Paredes, and a young, lovely Penelope Cruz. It's just so damn dramatic, with everything that could possibly go wrong doing just that, and tears galore, and this made the 100 minute runtime feel like twice that. All About My Mother's strongest suit by far is its style, particularly its use of color. As you may know, I'm a sucker for predominant and oversaturated colors, especially when used thematically, which they are here, especially the color red. It seems as though Almodovar uses a bright, vibrant red to mark characters or objects of interest in each scene, and these marks shift from scene to scene. I found it beautiful, and it was a large part of what held my interest. The direction and cinematography are both excellent as well, giving this film really everything it needs to be great. And it seems as though many find it to be a great film, unfortunately it just wasn't my cup of tea.