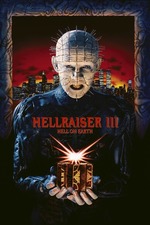 You know, the first time I saw Hellraiser III, I don't remember enjoying it nearly this much. There's no doubt that it's a bad film, but what makes it such a mess also makes it really funny. Anthony Hickox took Hellraiser from oppressive horror to campy action, and as a story, it widely misses it's mark, but I must say, it looks great doing it. Hickox has an excellent visual sensibility, as it's a really well shot film with some really creative shots. And the attention to detail in the sets is commendable. It's really dark and grimy, in kind of a cliched 90's sort of way. It's certainly never visually boring.

Man the screenplay is bad though. It's really all over the place, bringing in some convoluted shit about ghosts and dreams and dream ghosts and probably the douchiest looking club owner ever on screen. It feels like it just kind of trips over itself for an hour and a half, and the acting doesn't help. That is, of course, with the obvious exception of Doug Bradley, who's better than ever as Pinhead, this time bringing a maniacal cruelty to the role. I could really watch that performance all day. He somehow manages to take the crappy script he's given and produce some of the greatest lines of the film, astonishingly making them sound less stupid than they really are. He's great, is my point.

I've gotta make note of the creativity of some of the kills in Hellraiser III. A lot of them are absolutely ridiculous, but so cool and so much fun to watch. I also didn't hate all the explosions even though they totally weren't necessary. All of the Hellraisers are really hit or miss, but all the work that goes into the effects and the atmosphere always makes it worth it, and there's even some enjoyment to be gotten out of this, one of the lesser entries the series has to offer.