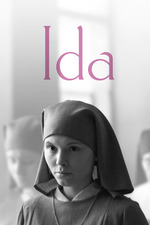 Pawel Pawlikowski's Ida is a beautifully haunting film that packs heaps of meaning into a sparse, 80 minute frame. In Poland, 1962, Anna, a young novice at a convent, is ordered by her Mother Superior to seek out her only living relative, whom she has never met, before she takes her vows. Not knowing what to expect, Anna travels to visit her Aunt Wanda, a hardened, bitter woman who tells her that Anna's real name is Ida, she's Jewish, and her parents were killed during the war. What follows is a road trip, as the unlikely pair set out to find the grave of Ida's parents in a reflective journey of discovery and heartache.

It's a gorgeous and moving film. The dialogue is simple and brief, mostly, but utterly poignant. Ida and Wanda experience things that cause each to question their own beliefs, both religious and moral, but Pawlikowski is not heavy handed, nor does he ever take any sort of stance. Rather, he invites us to merely watch and reflect. Even the cinematography takes a passive, almost voyeuristic role. Until the final two shots of the film, each frame is static, often set at a distance to the characters, who usually fill the corners rather than the center. And I cannot overstate how absolutely stunning this film is. Each shot is perfectly lit and composed, giving the film a timeless quality. It feels more like a series of moving snapshots than anything else. Every time I thought I had finally seen the most beautiful shot in the film, another would take its place that was somehow even more gorgeous. Shooting in black and white was the perfect stylistic choice. I couldn't help but keep comparing the cinematography to the work of Sven Nykvist. It really looked like a Bergman film.

Ida doesn't seem to be getting much attention at the moment, which is really a travesty. Do yourself a favor, if you haven't seen it, find somewhere that you can. You won't be disappointed.