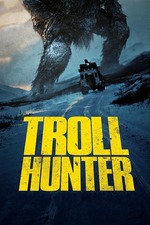 The found footage genre is quickly becoming tired, with more and more lazy entries popping up in the last decade or so, wearing out its welcome. However, after having seen Troll Hunter a couple of times now, I can comfortably say that it's probably one of the best found footage films of the past 5 years.

Surprisingly, Troll Hunter takes a premise that most would choose to address with camp and ridiculousness and plays it off completely seriously. Yet it never loses sight of the fact that it's a found footage documentary about a man who hunts trolls for the Norwegian government and adds enough tongue-in-cheek deadpan humor to be fun. I actually found the film's scientific explanations for troll lore and anatomy to be one of its strongest suits. It provides enough realism to make the film feel like a documentary who's crew has bitten off more than they can chew. On top of this, the effects are great, especially for a relatively low budget film. Not only do the trolls looks great but the way they move feels authentic.

Unfortunately, the characters don't feel as authentic. Otto Jespersen's Hans, the titular troll hunter, easily steals the show and gives the best performance of the film. But other than that, the characters leave a lot to be desired. The young college documentarians are bland and deliver uninspired performances, and other than that there aren't any other memorable human characters. Hans and the trolls are the real centerpiece of the film. It also suffers from some pacing issues, dragging its way through the boring segments between the actual troll hunts. It also falls prey to a lot of the tropes of the found footage genre, particularly lazy expositional bookends and an ending that feels incomplete.

Still, the good outweighs the bad and Troll Hunter succeeds in being a really fun, beautiful film. I honestly hope the Hollywood remake falls through because if given to the wrong person, it could tarnish a really enjoyable and refreshingly original film.