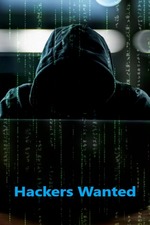 The story of Hackers wanted is mildly interesting in that it was never officially released; apparently, the producer and the director disagreed over its quality. However, both an early version and a supposed finished director’s cut leaked onto BitTorrent. I chose to watch the latter, and the reason that this movie never found distribution became rather painfully obvious pretty quickly – it’s neither a particularly interesting story, nor a particularly good execution of it.

It all starts with a typical history of hacking – MIT railroad club, Captain Crunch, &c. The film’s leitmotif is established as comparing hackers to the likes of Socrates and Feynman – controversial thinkers that pushed the science or civilization forward. But the story of Adrian Lamo, the documentary’s main focus in its latter half, is not really all that interesting, and the interviews with various other people just as unrevealing.

In between all that are gaudy infographics, randomly moving stock footage, and more fonts and cheesy effects thrown on the screen than Cap’n Crunch cereal boxes sold between 1965 and 1971. The interviews are all seemingly filmed with different cameras with deliberately mismatched white balance settings. And that’s not even the worst part – at some point, while Lamo is talking, another unrelated quote of his appears on the screen at the same time. The fact that this all was narrated by the great Kevin Spacey means that even famous people owe others favours.

Yes, fair enough, compared to Hackers are people too, by the time end credits start rolling, you will at least have learned something. But watching this movie is ultimately like reading Wikipedia on a pre-iPhone smartphone, with someone else clicking the links for you. Why wouldn’t you just directly go to Wikipedia instead on your cozy, modern machine…? Let me start you off.