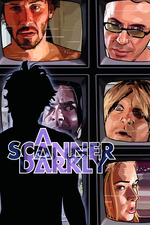 This is not a pleasure cruise, this is a rebellion of the senses.
A Scanner Darkly can be described as a shellshock to the way people think about and adapt Philip K. Dick. The future is here or near, and it's a hazy nightmare of drug abuse, serial intelligence gathering, and Carroll-esque logic loops. You are equally likely to melt your own brain as you are to be shot.
Running center is Fred, whose job is to watch the cameras inside the home of Bob Arctor. Bob Arctor is a recreational druggie burnout who mopes through his life trying in vain to come to terms with the fact his girlfriend won't sleep with him. Arctor and friends gobble mass quantities of the new psychotropic street drug Substance D. D is made of a little poisonous blue flower. No one knows who grows the flower.
Oh. And Fred is Bob and sometimes Bruce. Not that they really know for sure. Fred's boss Hank does, but Hank is not actually Hank so let's circle back away from that.
The film hinges tightly on this chaos. You are never out of the loop as a viewer, but rarely does Fred or Bob have a clue. The result isn't so much a mystery as a crass tragedy. You can only watch the spiral and find bleak amusement in the surreality of it all.
Winona does an impeccable job creating a strong character out of very little. Keanu's strongest skill is being confused and despondent. Harrelson and RDJ are not bad, but somehow end up falling into the background. They never achieve a truly powerful effect. At least not for me. Mileage of course may vary.
A Scanner Darkly feels best suited to cinephiles and stoners, with little to offer a sober crowd.

Pick of the Litter