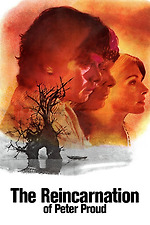 "Do you know what Northampton is known for? Girls."

Before I moved to Denver four years ago, I lived in Northampton, MA for five years while I worked on my masters. I loved it there and still do. But I began to become too familiar around my own ghosts untethertable presences which the area seems adept at creating, something that this film understands.

I followed up Night School, one of the best cinematic depictions of Boston (another home town), with this one.

A man in California sees splices. Images in dreams. A bridge. A tower. A black lake. They are not dreams. They are signals. He has a feeling and follows it.

This film plods against its tensions that are as ambitious as tv movie of the era. Rather than immersion, the film affects a position of being tagged along, summoning only a half hearted interest, possibly by Margot Kidder's groinpaddling.

I didn't finish the film. Perhaps I will later.

But what i was left with was a personal connection I'd not experienced.

The poetic beauty of 70's and 80's low-budget exploitation and horror films is their chosen regionalism. While a notable handful of films from the era are based in Massachusetts (Pieces, House by the Cemetery), few films use the area as a featured narrative device.

In the same way The Friends of Eddy Coyle succeeds, Night School and The Reincarnation of Peter Proud integrate Massachusetts into their brief mythologies that extend beyond a surface conception of place. What the place is, and how it affects and shaped the behavior characters, is integral to any consideration of these films.

It is more than location shooting or documentary-style cinematography, which of the films mentioned only Eddie Coyle employs. It is the capturing of essence, what Walter Benjamin named "aura", that distinguishes the premise of the films.

Midway through his Massachusetts journey, Peter Proud visits Springfield (established in 1636) and wanders into the shadow of a statue. The statue is The Puritan by Augustus St Gaudens. The gaze of the deacon looms. We forget that the U.S. was colonized as a way to practice one of the history's most conservative and supernatural religions. Our relationship with our roots has grown so distant, we fear acknowledging its trauma will only bring it back. This fear is the reason The Witch struck with so many. We have othered what we came from. Peter Proud revisits these origins as signals by considering trauma, which is another way to say "past lives"