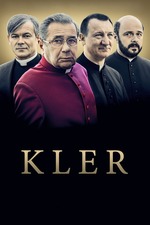 After 2011's "Róża" I said loud and definitive NO to any future films of Wojtek Smarzowski. His first movie, "Wesele" ("The Wedding") destroyed me, but was enjoyable at times and had some glimmer of hope in the end. The second, "Dom Zły" ("Evil House") destroyed me, but it told a damn good and gripping story. Then "Róża" destroyed me just plain and simple, then kicked me in gonads, then jumped on my guts, then set them on fire, and gave me NOTHING. Save for some actual suicidal thoughts. No, I said to myself. No more movies by this man for me, thank you very much.

He's done some more in the following years, to which my answer was always the same. "Drogówka" ("Traffic Department"), about the depravities in Polish police? Bypassed a wide margin. "Pod Mocnym Aniołem" ("The Mighty Angel") about alcoholism? No thanks, I'm driving. "Wołyń" about a Polish genocide of the Ukrainians during World War II? FUCK NO.

Then came "Kler" ("Clergy") about Catholic Church in Poland and from the get go I was against seeing it for the same reason: maybe his movies are good, probably they're important, but they're just not for me. Why would I want to do that to myself? Why would I want to give myself up for two hours of torture in a dark room? And pay for that? No way.

But then the movie gained a lot of attention, the viewings were packed for week after week, it raised to the number 3 of the most watched Polish movies ever, and I started to think: maybe? Then again I realised: this is a Movie With A Message. A very specific message. And if I know the message (namely, "church bad") and I agree with the message, why would I want to subject myself to it? Would I learn anything I don't already know? Also, message movies tend to be quite blunt in delivery, and in cinema I cherish few things more than subtlety, so it just didn't seem like I'd enjoy the movie on the pure artistic level.

But then (I promise it's the last "but then" in this story) another friend of mine convinced me it isn't so with "Kler", that the story is not that one-sided and in-your-face, quite a lot is understated and it's mostly character-driven. So I got some free tickets, a fellow movie afficionado's company, and went.

And you know what? While it didn't destroy me as Smarzowski's previous movies have (mostly because I came mentally prepared), I was right all along! It indeed was a Movie With A Message, and indeed I know and agree with the message, and indeed I haven't learned anything I didn't know before.

And it was far from subtle.

You see, the problem with subtlety in Statement Movies (as I like to call them) is that either the characters or the plot they're involved in (often both) are just a paper-thin excuses to drive the message in. When it comes to characters, "Kler" starts with a long scene of the three priests having a very drunken party together. So, right away, all priests are drunks. Subtle. But never mind that. See, these are our protagonists, each of a different parish, whom we will follow in this movie, and each will have a story about one of the biggest accusations of the clergy. All the problems of the movie stem from the fact that after this first scene our heroes never meet again. Their stories go their separate ways and almost never interconnect again.

This is exactly the sign of artificial characters written just to bluntly drive an unsubtle story - from the very first scene these are not actual characters, they're just the embodiments of the cardinal sins the movie wants to throw accusations about. And it's only in the fantastic acting where the stories are somewhat saved. Jakubik especially sells his character of a priest accused of paedophilia, making every scene gut-wrenching even if his character's actions are hard to believe up to and including the very last scene. Więckiewicz as one with a woman on the side also shines in the later part of the movie, when his plot thread gains more and more gravitas. Jacek Braciak as the career-minded hypocrite would be the weakest of the three if only his priest character didn't remind me of some actual ones I met in my life. And maybe this is what Smarzowski tried to do: cast as wide a net of topics that some of it will ring true with everybody in the audience.

Seriously, at some point I realized that Smarzowski and his co-writer Rzehak must have had a checklist of all the sins of the Catholic Church and decided to tick them all off even in the tiniest of mentions. Elitism. Alcoholism. Hypocrisy. Greed. Shady businesses with gangsters and/or politicians. Double lives. Even the idiotic statements about in vitro show up somewhere in the background. But of course the loudest is the topic of paedophilia.

Now, here is where the movie actually is kinda subtle, as it's unclear to the very end who is guilty and of what exactly, and while some scenes in this plot thread are as hard to bear as they are - in my opinion - unnecessary, others are really gut-wreching and powerful. The problem is that they all lead to a somewhat over the top ending full of pretty heavy symbolism, especially in Poland, both hystorically and currently. Though it did leave me - and I believe, also most of the audience - with the crushing feeling of frustration, the belief than nothing will ever change for the better, which I'm sure was the author's intent.

Some of the more subtle scenes and fantastic acting do save this movie from the autoparody it might have ended up being (comparing it to, for example, Patryk Vega's last year's "Botoks", which was also a propaganda movie statement against abortion, or "Smoleńsk"), but all in all I realised that I'm really not the intended audience for "Kler". One reason is that I'm not a person who needs to be persuaded on the matters discussed, but the other is that quest for subtlety in movies that I mentioned several times could not be successful in a Movie With A Message, as they're intended for the general audience for whom things must be as plain as possible.

But, as with the wide net of accusations I mentioned before, the ending - however heavy-handed it was - did get to me and the loudest string it resonated with me was the topic of frustration. So, I guess, Mr Smarzowski, mission accomplished?

I still am considering avoiding any of your future films, though. Unless you'll find a Statement that will prove to be new to me.