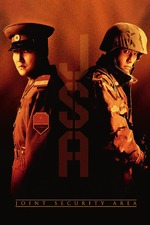 JOINT SECURITY AREA comes up with the stupidest expositional dialogues I have ever seen from a respectable filmmaker like Park Chan-wook. And yet the film manages to get me on his side. Because the film becomes interesting as soon as it slips from the big conflict into the private and makes it unmistakably clear that the private is also political.

At the same time, the seemingly conciliatory, even if tragic, end in the private cannot be a happy end on the greater stage. For if reconciliation has become something that has to be covered up at the risk of one's life, every hope seems to be crushed by the dehumanized situation.

The question is whether a conflict that has been smouldering for so long can still be resolved at all. Whether there can be a light at the end of the tunnel when both sides seem to have already forgotten where the hatred began. Whether one can ever again look with a clear view on a reality that has been bent beyond recognition by propaganda.

And JOINT SECURITY AREA also plays with this – by showing us supposed flashbacks, of which it is not clear whether they are wishful thinking, reality or memories crawling with propaganda.

This leaves us with a maximally diffuse feeling of hope, because the film ultimately bets on humanity.