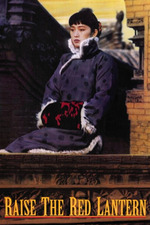 Divide and conquer. That’s the tactic used by the faceless yet omnipresent man owning the castle here, whose patriarchal power makes his four wives backstab each other to gain his favor.

But Raise the Red Lantern is not about this selfish man. It’s about the women who surround him, whether it be the jaded and neglected First Mistress, deceitful Second Mistress, the shrewd yet empathetic Third Mistress, the fantastic Gong Li who is learning the rules of this game, or the ambitious and jealous servant to Gong Li.

Through this polygyny and oppressive architecture, external forces wear down Gong Li's previously fierce spirit. Music is also used brilliantly here: the foot massage jingles can sound like a blessing or a heart-sinking curse depending on whether you are the "chosen one" that day. Chinese opera and instrumental music accentuate the lonely expansiveness of the towering walls and curvy rooftops where mistresses stroll aimlessly. The castle, where the entire film takes place, makes amazing compositions with its lines, angles, and framing.

Most of all, it's depressing to see how the women in this household had no meaningful goals to strive towards, and barely any genuine support networks and friendships. Any attempt from the marginalized members to band with each other was immediately trampled; any hope for escape was discovered and extinguished. This movie showed to me the importance of financial independence, reliable friendships, and just being born in the right century...

Fifth Generation Chinese Cinema is really something. I loved every moment of this hypnotic movie.

(I'm now realizing The Handmaiden needs to pay respects to this film; they have similar themes of rebelling against the patriarchy and opulent yet restrictive architecture!)