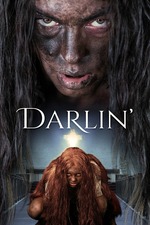 “God, a man of god, should be the one who draws first blood and breaks her into obedience.”

i think Darlin’ is my favorite of this loosely strung together trilogy. almost like a cute coming-of-age story. the grime of its predecessors gets swept under a shiny new veneer of polished frames, which makes the dark content all the more disturbing. lots of religious imagery and a clear message to damn the purity on display for its festering insides. this is like the third movie i’ve watched recently where the catholic church abuse scandal is heavily featured as an underlying theme.

Pollyanna McIntosh takes a step back from the key role of the woman and leaves the spotlight to Lauryn Canny as Darlin’. she remains in the background as the ever-present vengeance against and contrast to the actual human depravity that is shown in the bishop of the orphanage among others. as much as i like the head-on discussion of these themes, i think they kinda drop the ball on wrapping them up properly towards the end.

very rushed execution and the fact that Darlin‘ gets as well-read and educated within a matter of weeks... yeah not buying it. also, how did these two women evade any and all law enforcement for 15 years on their hunt? i know y’alls police over there ain’t the most qualified bunch but still. stretching my suspension of disbelief rather far, even if it’s not about that. dope ending tho.