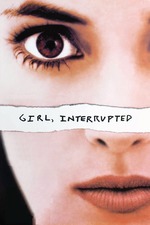 “Have you ever been blue? Or thought your train moving while sitting still? Maybe I was just crazy. Maybe it was the 60s. Or maybe I was just a girl... interrupted.”

and once again i come before you pleading the case of James Mangold as one of the best and most versatile directors working today. Girl, Interrupted is one of his earliest projects and already he displays signature notes of the idiosyncratic style he has refined over the years.

the episodic narrative fracturing the protagonist’s inner life into pivotal moments of her recovery; not entirely linear but wreathed through with that very distinct character feel of a tortured spirit trying to flee their own spiral. loves to wallow in its cynicism and uses it as a disguise for much deeper seated issues that reveal themselves gradually without being expositional. big sylvia plath vibes. i haven’t read the source material but this has me wanting to do so asap.

mental health on screen is a tricky business. although i love me a psychiatric setting, at this point i’ve gotten used to seeing them portrayed as terrifying and forsaken places full of nutjobs, be it for the camp, the comedy or the horror. at times Girl, Interrupted leans into that too but i found for the majority that the melodrama added a compassionate angle on the post-utopian society into which women like Susanna tend to be discarded.

Ryder and Jolie are yin-yanging it and also play things rather gay. no complaints from me there 😌